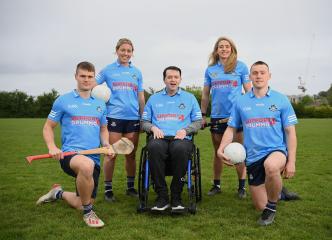 Dublin teams from all four codes will wear special, one-off jerseys in order to raise awareness of Support4Drummo fundraising campaign

Seán Drummond is a former Cuala and Dublin GAA underage player who suffered life-changing injuries in an accident in London after finishing college exams in 2019.

The Drummond family, their friends and the wider community were delighted to welcome Seán back to the family home earlier this year following a stay in the wonderful care of the staff at the National Rehabilitation Centre in Dún Laoghaire. The house has been adapted to meet his needs thanks to the generous support received from donors so far.

His team-mates and the wider Cuala GAA club have been central to these fundraising efforts and now AIG will give over their jersey sponsorship of Dublin’s four senior teams, men’s and women’s football, camogie and hurling, for a round of matches this month.

The Support4Drummo logo will replace AIG on the front of Dublin jerseys in four prominent matches in the coming weeks – Dublin v Galway in hurling next weekend, Dublin v Tipperary in camogie on May 28/29 and the Leinster football final doubleheader at Croke Park on May 28, Dublin v Kildare (men’s) and Dublin v Meath (women’s).

This will help to increase the profile of the Support4Drummo campaign, which is raising much-needed funds for Seán’s ongoing care, the next phase of which include cognitive, physical and speech therapies.

The Sean Drummond Trust will use all donations to help Sean regain as much independence and self-determination as possible. To make a donation visit: https://www.gofundme.com/f/support4drummo

Speaking about the launch today, Aidan Connaughton, General Manager at AIG Ireland commented: “AIG is proud to be able to lend our support to such a worthy cause as Support4Drummo. Seán has shown tremendous resilience so far in his recovery and the ongoing fundraising efforts will ensure that he continues on that road to recovery. We are really looking forward to seeing the Support4Drummo logo on Dublin jerseys this month and help drive awareness and much needed fundraising for the campaign.

“AIG is deeply rooted in the communities where our customers and colleagues live and our involvement with Support4Drummo reflects our continued commitment to those communities.”

Sean’s father Tommy, speaking on behalf of the family said: “We are all so proud of what Seán has achieved over the last three years, but there is still a long road ahead for him to reach his full potential. Sean requires a range of cognitive, physical and speech therapies to help him live his best life. With this in mind, we remain grateful for any further support and we are delighted that AIG have made this generous gesture to put Support4Drummo on the front of Dublin jerseys.”