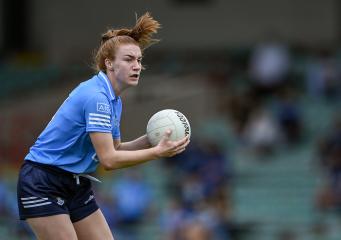 The TG4 Leinster senior championship returns this weekend following a two-year time out.

In 2020 (before COVID arrived) no championship took place as Dublin at the time were the only County within Leinster graded senior. Since then both Westmeath and Meath have returned to the senior ranks. In 2021 the pandemic took its grip on the Country as a result no provincial competition was organised.

Dublin manager, Mick Bohan is therefore naming his first Leinster championship team since the 2019 provincial final which ironically was against this Saturdays opponents, Westmeath.

Eight of the starting 15 which began against Meath in last Septembers TG4 All Ireland final are included in this Saturday starting line out in Mullingar. Ciara Trant, Leah Caffrey, Sinead Goldrick, Orlagh Nolan, Jennifer Dunne, Lauren Magee, Hannah Tyrrell, and Carla Rowe are all ready to go again as Dublin go in search of their 16th Leinster senior championship having won their first title back in 2002.

Others who began the 2021 All Ireland final versus Meath not named to start in this Saturdays first 15 but included on the Dublin bench are Martha Byrne, Niamh Collins, Lyndsey Davey, Niamh Hetherton and Siobhan Killeen. Former Captain Sinead Aherne is nursing a slight knock picked up in training midweek and will rest up for this game.

Westmeath lost their senior championship status in 2019 but returned to topflight football last season with an emphatic 25-point victory over Wexford in Croke Park.

This Saturdays encounter will be an interesting contest with champions, Meath carefully observing the outcome as the Royal County will be travelling to Parnell Park (7pm) on Saturday week to take on the Dubs in their own back yard full of confidence following on from their recent NFL victory over Donegal.

The action will get underway in TEG Cusack Park at 1:30pm.  Admission is €10, students €5 and under 16's free of charge tickets on sale now from https://bit.ly/3vNHIXJ