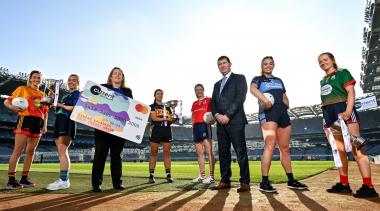 PLAYERS from the 2021 currentaccount.ie All-Ireland Ladies Football Club Finalists have gathered at Croke Park ahead of three eagerly-anticipated fixtures.

Clubs from five counties – Cork, Galway, Dublin, Mayo and Tipperary – have their eyes firmly set on silverware as they look ahead to the Senior, Intermediate and Junior deciders.

First up next Saturday, January 29, the Senior Final features Mourneabbey (Cork) and Kilkerrin-Clonberne (Galway) in a live TG4 fixture that will have a 1pm start at St Brendan’s Park, Birr.

This game is a repeat of the dramatic 2019 Final between the teams at the TUS Gaelic Grounds, which was settled by a late Laura Fitzgerald point for Mourneabbey.

On the following weekend, the Junior and Intermediate Finals will be streamed live on the LGFA Facebook Page: http://bit.ly/2OvUJ2D

On Saturday, February 5, the Junior Final will pit Tipperary side Mullinahone against Dublin’s St Jude's. The action will get underway in Baltinglass GAA, Wicklow, 1.30pm – LIVE on LGFA Facebook Page

On Sunday, February 6, is a meeting between Mayo’s Castlebar Mitchels and Dublin opponents St Sylvester’s. The venue for this final has been confirmed as Duggan Park, Ballinasloe, 1.30pm – LIVE on LGFA Facebook Page

Following Final heartbreak in 2014, 2015 and 2017, Mourneabbey finally cracked the code in 2018 when they defeated Dublin’s Foxrock-Cabinteely, before getting the better of Kilkerrin-Clonberne a year later to claim back-to-back titles.

That was Kilkerrin-Clonberne’s first experience of a Senior All-Ireland Club Final, and, managed by Willie Ward, they’ll be aiming to go one better on this occasion.

Both Intermediate Finalists, meanwhile, are gracing this stage for the very first time.

Castlebar Mitchels will hope to become the very first Mayo winners of the competition, as St Sylvester’s aim to emulate the feat of Clontarf (2018) by bringing the trophy to the capital.

The last team from Connacht to lift the Intermediate title was Annaghdown from Galway back in 2016, while a St Sylvester’s win would ensure a Leinster win for a fourth successive season, following the exploits of Dunboyne (2017), Clontarf a year later, and Naomh Ciaran from Offaly in 2019.

Castlebar Mitchels came through a thriller against Kerry opponents Castleisland Desmonds last Saturday, as St Sylvester’s got the better of Kinawley from Fermanagh on Sunday.

In the Junior Final, Mullinahone will aim to become Tipperary’s first competition winners, and keep the trophy in Munster for a fourth successive season, but they’ll face stiff opposition from a St Jude's side looking to claim a first Dublin win since St Maurs in 2016.

Thomas Davis (2012) and Foxrock-Cabinteely (2007) were the other clubs from Dublin to win the Junior title.

At a Croke Park photocall ahead of the games, Mourneabbey were represented by vice-captain Laura Fitzgerald, with captain Louise Ward present from Kilkerrin-Clonberne.

Club captain Lisa McManamon made the trip from Mayo on behalf of Castlebar Mitchels, while St Sylvester’s had captain Danielle Lawless in attendance.