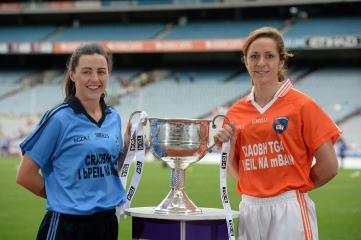 The last four Counties still in the running to lift the Brendan Martin cup are now confirmed following last weekend's third round series of group games.

Armagh, Cork and Galway joined Dublin in the final four. Armagh produced a shock result to defeat many pundits favourites Mayo, Galway hung on to claim a slim victory over Monaghan despite finishing the game with 14 players while Cork were clinical in front of goal to see off the challenge of Cavan.

The semi final pairings will be, Dublin versus Armagh on Saturday 28th of November with  Cork taking on Galway a week later on December 6th. Venues / Times are to be confirmed in due course by LGFA / Croke Park