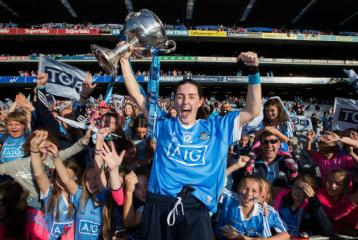 The end doesn't scare her, not nearly as much as she once thought it would. After 17 seasons with Dublin, every summer since 2004 fixated on the same target, you could understand how Lyndsey Davey might feel a little institutionalised.

But the great irony of lockdown was how it opened up her summer, giving the 31-year-old Skerries Harps star a glimpse of life after football: the luxury of days out with friends, afternoons spent floating around on a paddle board without a care in the world.

"You don't really realise how busy you are with football and work until you take a step back," she says. "And then you realise, 'oh, this is what it's like to enjoy a day at the beach.'"

Davey had long figured 2020 would be her last campaign with Dublin, but the closer it came the stronger the case was to stay going. Chats with Paul Clarke (1995 All-Ireland winner with Dublin who she works alongside in the Dublin Airport fire service), only re-inforced that view.

"He said: 'You're a long time retired so make sure when you go, you're ready to go.' Last year I was playing really well and when you feel you still have something to give, you want to keep going."

To stay in the fold is a choice, and far from a lack of options. Since 2015 Davey has juggled football with her career as a firefighter, which sees her log 12-hour shifts through day or night - seven to seven.

"Shift work definitely puts a lot of demands on you," she says. "Your sleep is all over the place but it's about getting the proper rest, nutrition and recovery."

Dublin manager Mick Bohan always factored that in to her preparations.

"If you're struggling and coming from a night shift, he'd be looking out for you and making sure you're not overdoing it. That's the sign of a good manager."

Her journey into the emergency services began in the back of an ambulance. It was 2008, and Davey had injured her knee during a challenge match against Monaghan, after which she got chatting to a paramedic. Davey explained it was her ambition to also go into that field.

The paramedic's advice? "Get life experience behind you first."

She went to DCU to study business and finance, then later took a job in the finance department in Croke Park.

As much as she enjoyed that environment, when Dublin Airport put out an application for firefighters the Skerries Harps ace jumped at the chance and sat the aptitude test.

Hard work has long driven her success, but Davey is gifted with undeniable talent. She was first called into the Dublin senior squad at the age of 14, but after a few weeks of juggling that with U-16 and minor duty she decided to step away.

"I was very intimidated by the setup initially," she says. "I was too young and got a bit overwhelmed."

Later that year, with the minor and U-16 campaigns wrapped up, a call came again from then Dublin senior manager John O'Leary. She was sitting in the stands when Dublin lost to Mayo in the 2003 All-Ireland final, and a year later she was out there herself, at just 15, as they lost the final to Galway.

"It was very hard to bounce back from that," says Davey. "Mick (Bohan) was taking over a team that was very hurt from those losses. Some players were talking about walking away and he managed to keep those players on board. We stripped everything back and went back to basics."

They've been unstoppable ever since, racking up three consecutive titles under Bohan, their average winning margin in those finals being north of seven points.

As this year's championship looms, though, Davey won't look beyond Dublin's group games against Donegal (October 31) and Waterford (November 7).

Their last game was against Waterford back in March, during which an injury-hit Dublin came from seven points down to earn a hard-fought win.

The delayed championship allowed them to get back to full health, even if they saw little of each other until last month - besides on Zoom, where they did group gym sessions, quizzes and cook-offs throughout the spring and summer.

These past few months, Davey's lifestyle has been more accommodating to the demands of inter-county training. She recently started a two-year paramedic course, and training now feels like a respite after being cooped in a classroom at the O'Brien Institute from 9-5.

It's something she always told students when she'd visit schools down through the years: don't give up sport during your Leaving Cert year; you'll need it then more than ever.

"It's only now I realise myself the importance of having sport," she says.

In a year of utter uncertainty, she's thankful to again have a competitive outlet.

"Everyone thought it was going to be pulled but you just couldn't let your mind go there. At the moment things are going ahead so we have to prepare and keep our minds that way. If anything happens in between, we'll just have to deal with it."

She's a five-time All-Star, a four-time All-Ireland winner, and there is every reason for her to have walked away by now, content with that lot. But what keeps her coming back is not the accolades.

"Enjoying it is the most important thing and I'm still enjoying it," she says. "I've so much fun with the girls training and that's the hardest thing to walk away from. That's what you'll miss the most: the friendship, the craic and the memories we've made."

Interview as featured in the Irish Independent, Saturday Oct 17th 2020