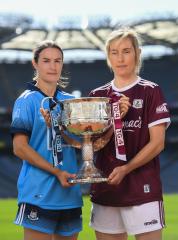 Dublin has announced their starting fifteen for this Sunday’s eagerly awaited All Ireland final clash with Galway. There are two changes to the Dublin starting 15 from that which began the All-Ireland semi-final versus Cork on August 25th last. Noelle Healy is named at full forward ahead of Niamh Hetherton while Jennifer Dunne comes into the team for the injured Nicole Owens at corner forward.

The two sides meet earlier this year in round 6 of the LIDL NFL on that occasion Dublin secured a four point victory over Galway (2-08 to 1-07) on route to their league semi-final meeting with Cork.

Twelve of the Dublin side who are named to start Sunday’s final lined out against Galway in the NFL encounter back in March. That encounter in Moycullen may prove pivotal to Sunday’s outcome. Galway really took the game to Dublin that day with the girls in blue having to dig deep in order to secure their win. This Dublin resilience could be called upon again on Sunday if the match goes to form and becomes a tight contest that many pundits predict it might be.

Dublin will be under no illusion as to the size of the task that lies ahead of them and are fully aware of the threat Galway will pose with Sinead Burke, Louise Ward, Megan Glynn and Tracey Leonard all expected to play key roles for the Tribeswomen.

Olivia Divilly and Roisin Leonard have also been in superb form for Galway throughout their championship campaign. Divilly plays an important role for Galway her link play combined with her runs out of defence can be instrumental in getting the Galway forward line operating. Curtailing her influence on the game might just be the key to Dublin retaining their title.

Aine McDonagh had by her standards a poor game against Mayo in the semi-final being replaced early in the second half. The Moycullen midfielder has the experience, height and strength to cause Dublin damage and will be another Galway player that will require close attention on Sunday.

No question, Nicole Owens will be a massive loss for Dublin up front however the St Sylvesters star will be very much in the thoughts of her teammates when they take to the hallowed turf of Croke Park on Sunday. Owens misfortune may just provide that extra piece of inspiration Dublin require in order to make history on September 15th either way football enthusiasts all over the Country can look forward to cracking game of football the result of which could go either way,  only time will tell!

Should the final end in a draw the replay is pencilled down for Sunday September 29th…..

TICKETS are on sale from lgfa.tickets.ie. Tickets are also on sale from select SuperValu and Centra stores. Please note on Sunday the GAA ticket office which is located on the North Circular Road / Gills Corner will be open to patrons wishing to purchase tickets.

Dublin LGFA would also like to acknowledge the support of CPL, KPMG and the Mater Private along with O’Neill’s, Ballygowan, Elvery’s Intersport and Neary Motors Lusk.