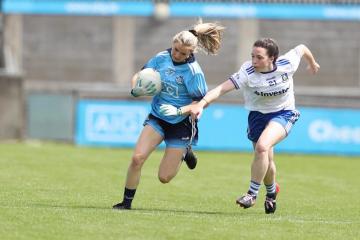 Reigning Champions Dublin safely made their way through to the TG4 All-Ireland quarter-finals by comprehensively beating Monaghan to top Group 2 after a one-sided affair at Parnell Park.

The ease of their navigation from the group will both delight and worry Dublin manager Mick Bohan in equal measures.

The lack of a test may be of concern down the line but for now, having taken care of Waterford by 18 points and Monaghan by 25, they ooze confidence with that scoring ability.

Dublin captain Sinead Aherne returned in place of fellow Sylvester’s forward Niamh McEvoy, who was ruled out with injury, and she produced a stunning performance which yielded 1-11.

Having shipped seven goals a week previous, Monaghan set up with defensive approach, with Aoife McAnespie playing a sweeping role.

That meant Louise Kerley at full forward was isolated for the majority of the contest and led to Monaghan struggling to find scores, managing just a couple of points in each half.

Dublin’s further riches were apparent when star forward Nicole Owens injured herself in the warm-up and Carla Rowe came in to replace her.

Rowe was in fine form and ended the first half with a terrific score to make it 1-12 to 0-2 at the break, with the goal coming from a penalty by Aherne.

Kerley landed the first point upon the resumption for Niall Treanor’s Monaghan side but there would be no comeback as Aherne landed three of the next four scores and Sinéad Goldrick also came forward to point.

Dublin substitute Caoimhe O’Connor firmly put the tie to rest with a well taken scored in the 41st minute after having been introduced at half time for Oonagh Whyte.

O’Connor was also on hand to ensure Noelle Healy’s shot crossed the line for the home sides third goal.

Dublin now face Kerry or Westmeath in a mouth-watering contest next weekend. Meanwhile Monaghan, will need to regroup for a relegation battle.