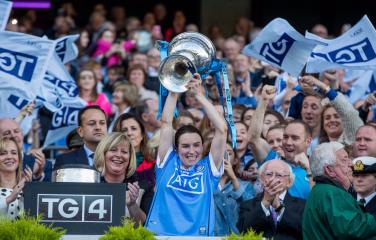 Dublin ended their losing streak in All-Ireland ladies finals with a dominant display of attacking football against Mayo.

The Dubs had lost the last three deciders to six-in-a-row winners Cork but, in front of a record crowd of 46,286, they put aside the heartache to beat the Westerners by 12 points and deservedly win their second title.

The winners forward lines were rampant throughout. Captain Sinead Aherne led by example with nine points (7f) , while Niamh McEvoy and Carla Rowe scored 1-01 each and Player of the Match Noelle Healey was a constant thorn in Mayo’s side.

A dogged defence led by Sinead Goldrick and Niamh Collins limited the impact of Mayo talisman Cora Staunton, and though their opponents were in contention until the last 10 minutes, three late goals from substitute Sarah McCaffrey (2) and the tireless Carla Rowe put the result beyond doubt .

Mayo had started the brighter, Staunton, playing in her seventh final, cancelling out Aherne’s opening free with a fisted point within three minutes.

The Connacht side were sitting deep, keeping just two or three forwards up front in an effort to counteract Dublin’s running threat, and it seemed to work early on.

Staunton was on target from a free and from play in the opening quarter, either side of a fine effort from Niamh Kelly. Mayo’s aggression was costing them frees however, and Aherne kept Dublin in contention from frees before they started to find some space.

The Dubs skipper had a sniff of goal on 16 minutes but opted to fist over and then put her team back in front with a lovely turn and score from the edge of the D.

The Dubs started to cut through at will now and Goldrick surged forward before laying it off to the unmarked Aherne. Byrne dragged her down and ref Seamus Mulvihill had no choice but to award a penalty and send the veteran netminder to the sin-bin

Sub keeper Aisling Tarpey made herself an instant hero as her first action was to save Aherne’s penalty, though the Sylvester’s woman will be unhappy with an effort that was far too close to the keeper.

Dublin continued to wreak havoc and should have been further than 1-6 to 0-6 up at the break while Mayo finished the half with 13 as Rachel Kearns was shown yellow for a late tackles.

After a superb opening 10 minutes, Staunton’s accuracy had deserted her and after seven wides in the first half, she missed a scoreable free two minutes after half-time. She cut a frustrated figure for the rest of the game, despite finishing with seven points (0-4f).

Dublin had three goal opportunities within eight minutes of the restart but Lauren Magee, Nicole Owens and Noelle Healy all shot narrowly wide.

Aherne dispatched frees either side of a neat effort from Mayo midfielder Aileen Gilroy as Dublin took a four-point lead into the final 15 minutes.

Staunton thumped over the point of the game to lift the Mayo fans but Rowe, who was a constant menace in possession, quickly cancelled it out at the other end.

Dublin were making it hard for themselves by missing opportunites and when Grace Kelly got her second with ten left on the clock it was a one-score game.

But after Orla Conlon had picked up Mayo’s third yellow of the afternoon, substitute Sarah McCaffrey’s first action on the pitch was to take a pass from Owens and bury the ball high into the net.

Mayo pushed gallantly for the goal they desperately needed but Dublin’s defence held firm and late goals from Rowe, with a perfectly placed shot, and a fisted McCaffrey effort secured the Brendan Martin Cup.