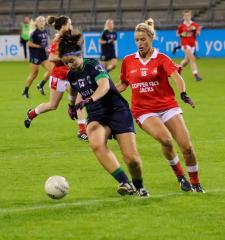 Foxrock Cabinteely retain title after a battle with St Brigds

Holders Foxrock Cabinteely saw off St Brigid's in the county final for the second year in a row at Parnell Park on Friday night, with the athletic, pacey and tactically astute south siders edging out their gritty rivals in a match that came down to a final, frantic play.

In a low scoring game, Pat Ringâs side stifled their opponents for much of the contest, slowly adding to a lead that rarely looked in doubt until a late St Brigidâs surge almost ended with the most unlikely of snatch and grabs, the Navan Road side falling a point short after a late goal line scramble.

Foxrock Cabinteely got the better of a slow start, knocking over two early points, though late Brigidâs replacement Marian Monaghan came inches from connecting with a through ball with her fists in front of the holdersâ goal as she reached for a potent early Brigidâs attack.

Cabo soon had chances of their own at the other end, a desperate block preventing Amy Connolly - who already had a point to her name - from tapping into an empty net three yards from goal.

It was Brigid's who were to find the net first, though, with Leah Mullins wrestling a hold on the ball in front of Foxrock âkeeper Laurie Ahern after a scrappy but effective move, and chipping over the âkeeperâs flailing arms into the net.

The Navan Road club were struggling to find sustained possession in threatening areas, though, despite the powerful, cutting runs of Sorcha Furlong from the back line. When their first point came from the boot of Enya Farrell, despite the goal it was only to be an equaliser.

Brigidâs continued to threaten, not least through a moment of controversy midway through the opening period, when a Mullins challenge on Ahern was deemed a foul at exactly the moment the ball beat the goalkeeper and edged into the back of the Cabinteely net.

With much of the play taking place in a crowded midfield, both sides started to find space to run into, with a hugely athletic Foxrock Cabinteely side better placed to take advantage.

By the time Connolly converted a ball from Amy Ring from close range past a helpless Ciara Trant, the south Dublinersâ four point lead looked fairly comfortable. The contest was becoming a tight, tactical game in which scoring opportunities were sparse, and both sides were playing fairly deep.

For all Brigidâs intent, a four point deficit at 1-8 to 1-4 was fairly reflective of proceedings come half time.

After the break, two points from Amy Ring, the second a fantastic angled effort from the right byline, quickly expanded Cabinteelyâs lead.

Brigidâs, in truth, were struggling to live with their rivals, with Connolly dropping back into the half forward line to build attacks and Brophy and Goldrick proving difficult to live with in the middle.

For 20 minutes there was to be no emphatic moment, more of a slow yet inevitable wearing down of Brigidâs; a combination of swift moves, clever dinks and smartly taken points that forced Brigidâs onto the back foot.

When Anne-Marie Murphy pushed Foxrock Cabinteely into a six point lead with an angled point a few minutes before the end, the south Dubliners had the luxury of leaving five players back to mark just two Brigidâs forwards.

Enya Farrell found a space, though, taking a superb goal to narrow the gap to three points, before free taker Elaine Kelly gave Brigidâs late hope with six minutes left on the clock.

Suddenly, a tired looking Foxrock were playing keep-ball, bereft of the momentum that had taken them away from their rivals. Amy Ringâs free as the game crept into injury time restored a three point margin, leaving Brigidâs looking like they needed a goal.

Caroline Brogan instead took a point from the first Brigidâs chance. They came again, with Enya Farrell shooting from the edge of the box only to see her shot spin agonisingly wide of the far post.

With Cabo holding on, a series of close frees ended with a goal line scramble in which Brigidâs hunted out that game winning opening. When it came, Elaine Kelly had a split second to get her shot away and most of the south side teamâs back 8 populating the goalline. Under pressure, she dragged her finish just over, rather than under, the bar.

By a single point, Foxrock Cabinteely maintain their title.