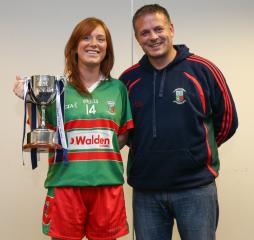 NEW IRELAND ASSURANCE JUNIOR B CLUB CHAMPIONSHIP FINAL
NAOMH BARROG 1-10
TEMPLEOGUE SYNGE STREET 0-10
By James Hendicott
A late Naomh Barrog goal got the better of Templeogue Synge Street in a low scoring but dramatic Junior B final at Lawless Park on Wednesday night, with Aisling McDonaldâs late fist into the Synge Street net proving the difference.
Defensive prowess won out in the early stages, as both teams closed down and crowded out their opponents attacking efforts, Barrog blocking a couple of early point attempts while the Synge Street defense stifled forays into the penalty box at the other end.
Synge Street slowly edged in front, with points from Lucy OâDonovan and Kelli Taite from distance getting the better of the domineering defences, while Barrogâs Lauren Buckley was becoming increasingly influential in midfield. Aisling McDonald had the first real goal chance, hitting straight at Gabrielle Ruane in the Synge Street goal after finding herself clean through.
Synge Street were taking their points, though, and pushed on to a lead of four before Barrog really got to grips with the game. As Buckley continued to pull the strings for the Kilbarrack side, they struggled to convert limited chances, with two Zoey Dalton frees slowly edging them back into the game.
The close of the half ebbed and flowed, with both teams enjoying extended periods of dominance in the opposition half, but Barrog made the better of it, closing from four points down to go in just 0-5 0-4 down at half time.
Synge Street were quick to extend their lead after the break, with Aoife Costello making moves in midfield, and twin frees from consecutive attacks put away by OâDonovan. A period of possession from Barrog closed the gap once again, but with forty minutes gone, Synge Street had led since the opening forays.
That was about to change, as a charging run from Laura McGinley took Barrog from back to front, with a scrappy period around the box ending with Aoife Martin leveling up from distance. Confidence rising, Kate Pepper broke down the left to score her third point of the game and give Barrog their first lead.
OâSullivan twice hit back, but having limited Synge Street to four points since the opening minutes, the momentum was with Barrog. A late chance for Dalton - imperious with her frees all game - dropped short, but Aisling McDonald finished things more emphatically, fisting into the net from a Lauren Buckley run with two minutes remaining.
Synge Street conjured up a series of late flurries into opposition territory, with OâSullivan pulling one back as the pressure mounted, but McDonaldâs emphatically taken goal proved enough to take the title back to Kilbarrack.
Naomh Barrog scorers: Z Dalton 0-6(6f) K Pepper 0-3 A McDonald 1-0 A Martin 0-1
Templeogue Synge Street scorers: L OâDonovan 0-7(6f) K Taite 0-2 R Cleary 0-1
Referee: Finbarr Shanahan