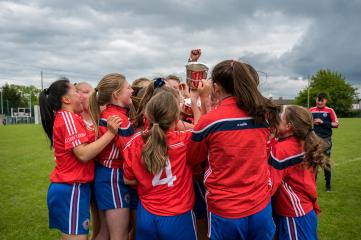 Applications are invited for Dublin Féile 2022 which will take place on the weekend of the 23rd and 24th April 2022.

Entry form(s) are to be submitted by the club Secretary on or before the deadline Friday 25th March to - info@dublinladiesgaelic.ie.

Forms have been issued to all affiliated club Secretaries this morning by County Secretary Mary O'Connor.

Féile 2022 is an U15 competition. To be eligible to field in Féile 2022 players must be born no earlier than 2007. We ask that the teams entered be primarily U15 players, supplemented with younger players only where necessary. Note that the games for U14 and U16 will remain scheduled for 24th April.

Members of the Dublin U14 Intercounty panel will not be available as they are due to participate in the U14 All-Ireland Series.

In order for Féile to take place a sufficient number of venues will need to be offered by clubs and sufficient support offered by volunteers to come forward to act as organisers and venue coordinators is also a requirement. Each group of four teams will need two full size pitches available for the round robin, and one pitch for the semi-final on the 23rd.  Helpers to collect and deliver will be needed on the week prior to Féile.

All Games shall be played on a 15-a-side basis over 15 minutes per half on a full sized pitch*. Eight team format per division (except for lowest division or two divisions, depending on numbers of teams entered). Format is two groups of four to play round robin, semi-final first in Group A plays second in Group B and vice versa.

B), a round robin shall be played within the group (3games x30 minutes (2 halves of 15) =90 minutes playing time in group stage). The winner of Group A plays the second team in Group B and vice versa in a semi-final with semi-final winners progressing to final on Day 2.

Semi-finals and finals shall be 15 minutes a side.

*Where Divisions of more or fewer than 8 teams are required in the lowest divisions the competition format shall be decided by the County Board, with a view to providing an equivalent amount of playing time as in the 8-team divisions.

Should a team drop out after ratification the playing times of the remaining teams shall be adjusted in a similar fashion.

A playing panel for Ladies Gaelic Football shall be confined to a maximum of 24 players per team.

Each team shall be accompanied by a maximum of 4 team mentors, one of whom should have first aid training so as to enable them to administer basic first aid if so required. Where a panel of 24 players has been submitted by a Club their team must play 19 players, as a minimum, during each game, i.e. 15 players to commence the game and at least four substitutions on an interchange basis (See Substitutions below). THIS APPLIES IN ALL GAMES (ROUND ROBIN, SEMI-FINAL AND FINAL), EXCEPT AS ABOVE FOR PLAY-OFFS.

Where a team, due to unavailability, injuries or suspensions may not have 20 players available to them they must submit their full list of available players to the local Féile Official before the game and play each of these players in that game in accordance with the interchange policy. I.e. if a Club has 19 players only available to them, they must play all 19 players during the game and may interchange players as they deem appropriate.

Unlimited substitutions are allowed with additional requirements as follows

1. Two substitutes will be introduced 10 minute into the first half and two further substitutes 5 minutes into the second half, (on the referee`s signal). These players are to remain on the field for the remainder of the game (except in the case of injury).

THE PLAYERS INTRODUCED DURING THESE INTERCHANGES SHALL PROVIDE SUBSTITUTION NOTES TO THE REFEREE GIVING THE NAME AND NUMBER OF THE SUBSTITUTES BEING INTRODUCED.

THIS APPLIES IN ALL GAMES (ROUND ROBIN, SEMI-FINAL AND FINAL), EXCEPT AS ABOVE FOR PLAY-OFFS.

There is no requirement to make substitutions in the case of play offs where required.

a) Where a club fails to observe the Féile rules regarding the minimum number of substitutes to be made that club shall forfeit the match.

b) Where both clubs in the same match fail to observe the Féile rules regarding substitutes the match shall be deemed void.

2. All players should play a minimum of 30 minutes in the Féile weekend.

3. All clubs should be encouraged to promote an equal playing time ethos where younger players are not playing above their age grade unless absolutely necessary due to a lack of numbers within the club.

4. Substitution is by means of baton exchange [During stoppage in play and at midline]