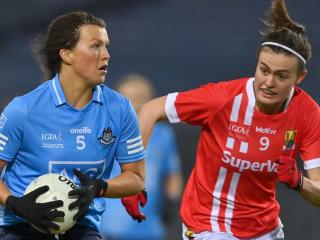 THE Ladies Gaelic Football Association and Championship sponsors, TG4, are delighted to confirm a bumper schedule of Spring fixtures.

TG4’s 2022 live coverage of Ladies Football gets underway on Saturday, January 29, when holders Mourneabbey from Cork and Galway’s Kilkerrin-Clonberne clash at St Brendan’s Park in Birr.

Following the conclusion of the Club Championships, with the LGFA set to live-stream the Junior and Intermediate Finals on February 5/6, attention quickly turns to the commencement of the 2022 Lidl National Leagues.

The live TV action gets underway on Saturday, February 12, when Donegal host Galway under lights in Ballybofey (7.30pm).

TG4 will screen a live game from each of the three rounds of group fixtures, with the DUBLIN v Cork tie at Croke Park on Saturday, February 19, forming part of a double-header with the Dublin v Mayo men’s fixture, the ladies action gets underway at 5:15pm

On Saturday March 5 the live action features Meath against Dublin (3pm) in a meeting that will revive memories of the 2021 TG4 All-Ireland Senior Final between the counties.

TG4 will then provide live coverage of the Lidl NFL Division 1 semi-finals on Saturday, March 19, with those games confirmed for 1pm and 3pm.

TG4’s coverage of the Lidl National Leagues concludes on Sunday, April 10, with the Finals in Divisions 1 and 2, which will be played as a double-header at Croke Park.

The Division 2 Final will throw in at 2pm, followed by the Division 1 decider at 4pm.

Peil na mBan Beo will be available to audiences globally on the TG4 Player at www.tg4.ie/beo and on the TG4 Mobile and Smart TV App.

Ticket info will be available shortly for the NFL double bill in Croke Park on February 19th.