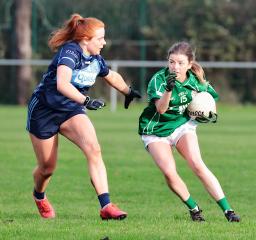 It was a very progressive weekend on the pitch for Dublin club sides as both St Sylvester's (Intermediate) and St Jude’s (Junior) chalked up convincing victories over UK opposition to book their respective places in the LGFA All Ireland club championship semi-finals on Sunday January 23rd next.

On Saturday St Sylvester's saw off the challenge from Holloway Gaels with a 2-12 to 0-5 win which sets them up with a semi-final meeting with Ulster champions, Kinawley (Fermanagh).

Sinead Aherne was in good form throughout the contest hitting 1-05 (3f) while Nicole Owens who gave a commanding performance at midfield bagged herself 1-02 from play.

Also on the score sheet for St Sylvester's was Kate Sullivan with 0-02, her sister Emma Sullivan hit a brace also (0-02) while Kim White chipped in with a point.

St Jude’s enjoyed a comprehensive forty point victory over Tir na nOg from Newcastle in their Junior quarter final. The Dublin champions led at the break by 2-07 to 0-04 with the opening goal of the first half scored by Aoife Keyes and Cliodhna Nicoletti.

Keyes hit the back on the net again shortly after the restart which effectively ended the game as a contest. St Jude's hit top gear in the second period of the game adding an impressive 7-11 to their first half tally to run away convincing winners in the end by 9-18 to 0-05.

St Jude's will now welcome Ulster champions Carrickmacross (Monaghan) to Dublin on Sunday January 23rd for what should be an entertaining All Ireland semi-final contest.