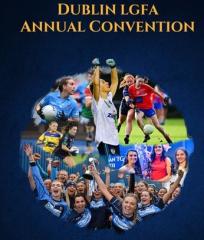 Our Annual convention of the Dublin LGFA took place this morning (Dec 4th) via Zoom.

Ahead of the meeting club delegates received a comprehensive book of reports outlining the tremendous work carried out throughout 2021 on behalf of Dublin LGFA.

Fearghal Brennan and Bernice Jones Moore are to be appointed to serve as Development Officer and Children’s Officer respectively as a recommendation of the Executive Committee.

Key points to note from the AGM is the substantial growth of Dublin LGFA in 2021 which saw our association’s membership exceed twenty-two thousand an increase of 5,216 on last year.

Our adult season was the biggest in our associations history with 110 teams entering across eleven divisions for league and Championships.

Our adult league season consisted of over 900 plus fixtures along with approximately 480 fixtures in cup competitions, our adult championship and shield season had approx. 360 games which meant in total approx. 1,700 fixtures were complete in a season which was shortened by nine weeks owing to Covid.

Our underage leagues commenced in June with 358 approx. teams competing between U13 and U18 which resulted in about 1,700 fixtures completed before the summer break.

The championship season saw the introduction of alterative week of fixtures from U13 to U16 up to an including minor which saw 1400+ fixtures completed.

Overall, with the shortened season, covid out breaks and the introduction of alternative week’s Dublin LGFA managed to complete the fixtures calendar under immense pressure and played somewhere in the region of 3,000 plus fixtures in this age group (U13 to minor) along the way which shows the huge growth in our games and membership.

In 2021 a total of 653 teams participated in the Dublin LGFA games programme for players between U8 and U12 age groups.

The breakdown of numbers per age group:

The fixtures officer, Paul McLoughlin in his report thanked his Camogie counterpart Brendan Cooper, for his assistance and cooperation throughout the season. Communication was constant, both bodies have a very good working relationship which will be built on further moving on into 2022.

Chairperson, Joe Keane informed the delegates that an appraisal is currently underway reviewing all areas of the association from administration, fixtures, finance, development, discipline etc., and the findings of these reviews will be reported back to club delegates in the coming weeks.

This review is necessary owing to the development and further anticipated growth of Dublin LGFA in the coming years and the knock-on effect of administrating a progressive association by persons in a voluntarily capacity.

Convention concluded with the Chairperson thanking everyone who attended the meeting and for their contribution to same.