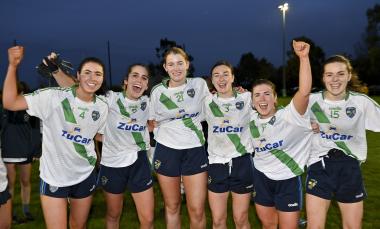 Dublin clubs march on in Leinster

Dublin clubs march on in Leinster …

It was an excellent weekend on the playing fields for all three Go-Ahead Dublin club champions with St Sylvester’s, Foxrock Cabinteely and St Jude’s all registering victories to keep their respective Leinster championship campaigns alive and on track for another weekend.

First up on Saturday, St Sylvester’s travelled to County Laois for their quarter final meeting with Ballyroan. The visitors enjoyed an impressive opening 30 minutes and lead at half time by 1-11 (14) to 1-02 (5).

Despite being down a number of key players for this fixture including team captain Dannielle Lawless, St Sylvester’s were able to shake off a late rally from Ballyroan to register an important away victory. Full time score St Sylvester’s 2-15 (21) Ballyroan 1-10 (13).

St Sylvester’s will welcome Westmeath champions, The Downs to Malahide this coming Saturday December 4th. This provincial semi-final clash will be streamed live on the Leinster LGFA with the action getting underway at 1:30pm.

On Sunday (Nov 28th) both Foxrock Cabinteely and St Jude’s took to the provincial stage.

Reigning senior Leinster champions Foxrock Cabinteely secured their place in the provincial decider when they defeated an up-and-coming Tullamore team who despite what the score line might suggest provided the Dublin champions with a serious work out.

At half time Foxrock led by four points playing against the wind, corner forward Katie McNally having score the only goal of the opening half, HT score Foxrock 1-04 Tullamore 0-03.

Foxrock forward, Andrea Murphy was causing problems up front throughout the game for Tullamore. Murphy was rewarded for her efforts with a goal just before water break which put her side six points clear of their challengers. Foxrock ran their bench in for the final quarter, fresh legs combined with their game management experience saw the champions over the finishing line, with the 10 points the winning margin on the final whistle FT score Foxrock Cabinteely 2-09 (15) to Tullamore’s 0-05.

Foxrock will now put their provincial title on the line next Sunday (Dec 5th) when they take on Dunboyne of Meath in the Leinster senior final which will again be streamed live by Leinster from Kinnegad GAA club at 1:30pm.

In their semi-final, Dunboyne needed extra time to secure victory over Tinahely of Wicklow. The Wicklow side looked like they had just done enough to book their place in the 2021 decider when a low speculative shot by Emma Duggan was deflected into the net off a Tinahely defender to set up a Dublin v Meath final.

St Jude’s got their maiden journey in Leinster off to a flying start with a hard-fought victory over Skryne of Meath. The home team held onto a slender lead for the majority of the opening quarter until St Jude’s edged in front for the first time with a well taken goal which came just 6 minutes before the interval. HT score St Jude’s 1-05 Skryne 0-05. Ciara Smyth raised the green flag for the Meath champions 14mins into the second half to put Skryne ahead by two points as the game edged into the closing stages.

To their credit St Jude’s hit back well with two goals of their own to seal victory and book their place in the provincial semi-final this coming Saturday. FT Score St Jude’s 3-07 (16) Skryne 1-10 (13).

St Jude’s will hit the road again this coming Saturday when they travel down the M50 to take on Wexford Junior champions, Kilanerin. This contest will be streamed live on the Leinster LGFA Facebook page, 1:30pm