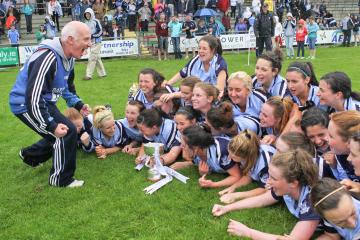 As the 2021 sporting year winds down, on field preparations are already underway for those entrusted with fostering the emerging crop of young Dublin Inter County footballers.

Early last month, Dublin club delegates ratified the management teams in charge of overseeing the progress and development of the sky-blue Minor, Under 16 and Under 14 squads.

Those long involved in Dublin LGFA circles were delighted to witness the return of two Dublin legends to the capitals Inter County set up. Returning to the Dublin fold, are Fintan O’Curry and Denise Masterson both of whom are named amongst the 2022 Dublin Minor management team.

Senior All Ireland winning Captain, Denise Masterson was the first Dubliner to lift the Brendan Martin cup when her side defeated Tyrone in the 2010 TG4 All Ireland Final. While Fintan O’Curry is a former double All Ireland winning manager having led Dublin to glory at minor level in 2012 while two years previously guided the Dubs to the Under 16 title.

Current senior players guided by Fintan at underage level include Ciara Trant, Leah Caffrey and Carla Rowe to name but a few. All of whom went on to achieve major success at Under 21 and senior level. Trant, Caffrey and Rowe added to their All-Ireland success by picking up numerous All-Star awards along the way.

Fintan Keeling will manage the Under 16 panel having previously served time in charge of the Under 13, Under 14 and Under 15 development academies. Fintan will be ably assisted by Eamon Bryce

The Dublin U14’s will be managed by Shay O’Reilly who when last in charge of this age category brought Dublin to the 2018 All Ireland final and a showdown with Cavan. O’Reilly has gained valuable experience in the interim years working with both the Dublin U15 and U16 squads. Joining him on the U16 management ticket are Keith Murphy, Christine Johnston, Orlaith Keane, Ryan McKittrick and Sandra O'Brien.