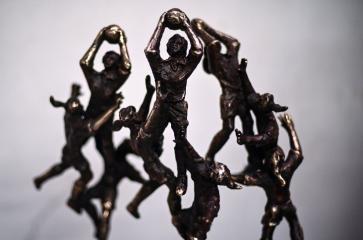 The 2021 LGFA All-Star awards will be announced this coming Saturday night. TG4 All-Ireland runners Up and LIDL NFL division one winners, Dublin have nine players nominated.

The All Stars awards where first presented back in 1981 seven years after the founding of the Association in Hayes Hotel, Thurles in 1974.

The All-Star banquet as we know today commenced back in 2003 up until then players received their awards after a football match which was normally played between the reigning All Ireland champions and an All-Star selection.

Since the inception of the All-Stars awards 32 Dublin players have received statuettes with the first being won back in 1983 by Kathleen Kennedy who was honoured as All Star goalkeeper, she followed this up with a second award for the same position in 1984.

Sinead Aherne and Sinead Goldrick are joint leaders on the Dublin All-Star honours list with seven awards each. Lyndsey Davey is next up with five All-Star awards. The Skerries Harps sharpshooter may add a sixth award to her tally this Saturday night following another outstanding season in sky blue. Also looking to add to their awards tally are Ciara Trant (2), Leah Caffrey (2), Lauren Magee (1) and Carla Rowe (3).

This year, no Dublin player is in the running for the coveted ‘Senior Players Player of the year Award’ with previous winners being Noelle Healy (2017), Sinead Aherne (2018) and Siobhan McGrath (2019).

Stay tuned to the LGFA social media channels on Saturday night for the LIVE announcements of the 2021 Award winners. Wishing all of our nine nominees the very best of luck.