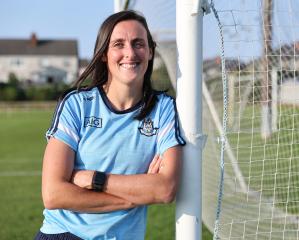 There might have been a few double takes back in May from any one perusing Dublin’s list of scorers from their opening League game of the season against Waterford in Parnell Park.

“H Tyrrell 1-5.” Hannah Tyrrell?! The rugby international?! The very one. You couldn’t keep up with her.

It was only the month before that she was lining out for Ireland in their Six Nations games against Wales, France and Italy. Now, here she was, back in blue for the first time since 2014, looking like she’d never been away.

This takes some explaining, Hannah Tyrrell. “Well, when I started the year I had huge intentions of nailing down a starting place at 10 for Ireland for the Six Nations and the World Cup, if we qualified for it.

My plan then was to retire from rugby, go back to Gaelic football and try to make the Dublin squad again. But, of course, everything changed with Covid.

The World Cup was postponed and pushed back for over a year, so I had a lot of thinking to do. “I’m getting a little bit older, I’m getting on in life, I had other plans outside of rugby so I didn’t know if I could commit to the team for another 18 months.

I really wanted to start putting my career first, my wife, my family, I had put off so many things over the years playing international rugby. I wanted to enjoy another side of my life. I loved the years I had playing for Ireland, but I decided to step away. That ended up leaving me with a free summer. It all just fell in to place and I ended up with Dublin.”

She’d had time on her hands too the previous summer, so she hooked up with her club Na Fianna. Between 2014 and then, though, she had only played two games of Gaelic football in six years, both for her original club, Clondalkin’s Round Towers, one a friendly, the other a junior Championship game.

“I just fell in love with it again, I’d really forgotten how much I enjoyed it,” she says. “When I left in 2014 I really only thought I’d be away from Gaelic football for two years, three max, but it ended up being seven. I missed it immensely. It was always the dream to get back with Dublin, although I didn’t think it would come this soon.”

Even before rugby took over her sporting life, Tyrrell had been cross-coding. Soccer had been her first love growing up in Clondalkin, and she achieved no little success, winning the FAI Cup final in 2011 with St Catherine’s before playing for Shamrock Rovers in the inaugural 2011-12 National League season.

By then she was double-jobbing, playing for Dublin from under-14 level up, winning under-16 and under-18 All Ireland titles along the way. Not as the rampaging, prolific forward she is now, but as a goalkeeper.

She played one season as an outfielder for the seniors, in 2013, but for her final campaign with her county, she was back in goal.

If she hadn’t enough to be doing, she decided to give rugby a go in 2013, joining Old Belvedere. She impressed sufficiently to be offered a Sevens contract by the IRFU, so the pause button was pressed on her Gaelic football career.

Not that the Irish women’s rugby set-up hasn’t been without its flaws or controversies through that time, but she loved those seven years, she says, warts and all, loved the opportunity to pull on the green jersey, travel the world with the team, and be involved in “a full-time professional environment”. And she was relishing her new role at outhalf too, having largely played before on the wing or at fullback. This year was to be a special one, leading the team in her new role in to the Six Nations and the World Cup. Then, enter Covid.

But the premature ending of her rugby career opened up the possibility of her realising one of her sporting dreams - to win a senior All Ireland with Dublin.

On Sunday, the 31-year-old, who teaches history and geography in St Patrick’s Cathedral Grammar School, will get the chance to achieve that feat when Dublin take on Meath, the county against whom she made her senior debut eight years ago.

“Ah, it’s been a whirlwind of a year,” she says. “When I retired from rugby, Mick [Bohan, the Dublin manager] invited me in to the squad to see how I’d get on. To be honest, we both thought it would take me a lot longer to get to grips with it all.

“The first night I arrived at training was daunting, going in to a squad that has won four All-Irelands in a row. There were some familiar faces, girls I’d played with at underage and back in 2014, but there were a lot of new faces too. I was nervous, but after that first training session I was obsessed, I just wanted to go back out and train with them again, they were brilliant.

“A lot of things have changed since 2014, but the biggest thing I noticed was the standard of playing. So many young girls who are genuinely talented, skilful footballers. And a great backroom team, catering to all our needs. It’s stepped up so many notches since I was last there, in terms of professionalism.

“I had come from an international background, from a high performance environment, but the standards were just as high. In every other aspect, though, we’re still amateur, and we’re very happy to keep it that way because we do this for fun. We’re serious when we need to be, but at the end of the day we’re here to enjoy it for what it is because we know this won’t last forever.”

While Bohan described her return to Gaelic football as “seamless”, Tyrrell says there was plenty of rustiness to overcome. “There were definitely some frustrating days, the body took a little bit of adjusting.

You’re using different muscles, all the soloing and stuff, we wouldn’t kick half as much in rugby, so that took some work.

“But Mick just kept encouraging me, he was like, ‘just go out and enjoy it’. We played a couple of challenge games, it started to click, but it took a couple of sessions for me to start making good decisions - and back myself. That was a big thing, to get the confidence to back myself.”

Not that the Dublin panel is short of talent, but the loss of the peerless Noelle Healy through retirement had left a sizeable gap to fill. Tyrell, who has scored 57 points in her nine League and Championship games for Dublin this year (3-48), has gone a considerable way towards plugging it.

“I can’t say enough about her,” Cora Staunton told the RTÉ GAA Podcast recently. “She’s done a phenomenal job for Dublin. In most of her games since she’s come back she’s been player of the match. That’s a huge feat when you’re coming into a star-studded Dublin team. She’s filled a void that Dublin had with Noelle Healy retiring. We haven’t really seen the loss of Healy - a footballer of the year who won numerous All-Stars.

“She blended into the Dublin forward line, but it’s not just her scoring prowess. If you watch her she’s one of these players who can play inside, out in the half-forward line, as a tracker or working as a wing-forward. She has a number of different things to offer on match day.”

High praise. About a player who said before her return to the Dublin set-up: “I was thinking about asking Mick if I wasn’t too old would he still have me, but I didn’t know if that was a possibility”.

“Well, I have some pretty decent players around me,” she laughs, “so they’ve helped me through it. I’m definitely not the finished product yet, there’s an awful lot of learning still to do, I know I can improve on what I’ve done so far this year, hopefully that comes in the final - and beyond. To be part of this squad has been incredible, it’s been a huge learning experience for me, but I’m just really enjoying my football - to be honest, I don’t want it to end.”

She has an added incentive for winning on Sunday. Just days before Dublin’s All Ireland semi-final win over Mayo, Tyrrell married her long term partner Sorcha Turnbull, as if the year wasn’t momentous enough. Turnbull was Dublin’s sub goalkeeper when they won their first senior All Ireland in 2010.

“So, my wife has a senior All Ireland medal and I don’t – and that’s something that is a constant jibe in this household. I need to even things up.”

If she does, she’ll add to a collection that includes those FAI Cup and Six Nations winning medals.