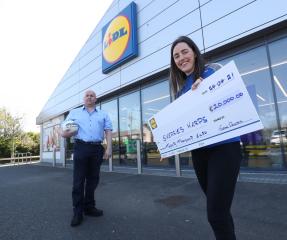 Lidl Ireland has announced the winners of its club fundraising initiative that took place earlier this year, with €187,000 cash prizes and nearly 500 jerseys being awarded to local Ladies Gaelic Football clubs across the country.

Dublin’s Skerries Harps, Donegal’s Bun Dobhráin, Sligo’s St. Johns and Cork’s Kinsale LGFA Clubs were awarded a top prize of €20,000 each from the retailer as part of the initiative which called on communities to support their clubs by scanning their Lidl Plus app at the checkout in their local Lidl.

The initiative will see more than 360 LGFA clubs benefit from new jerseys to up to €20,000 in funding.

The innovative initiative was launched as part of Lidl’s new campaign, Level the Playing Field, that called on communities to get behind their local club by scanning their Lidl Plus app to receive a digital stamp on their stamp card. Once six stamps were collectedn, users could submit their completed stamp card via the app and their stamps were then added to their chosen club’s total. Each club that achieved a minimum of 50 completed digital stamp cards was guaranteed a reward.

Commenting on the initiative, Mícheál Naughton, President of the Ladies Gaelic Football Association said: “At a time when our clubs and communities have rallied together more than ever, the ‘Level the Playing Field’ campaign has proven to be an outstanding success. So many of our members have been busy shopping and collecting stamps to enable local clubs to earn great rewards. Once again, Lidl Ireland have shown their commitment to our sport at grassroots level, and we very much appreciate their continued and #SeriousSupport. The TV advertisement that accompanied the ‘Level the Playing Field’ campaign was truly memorable and has been mentioned to me on numerous occasions and yet another example of Lidl’s exceptional commitment to our sport. Well done to Lidl Ireland and also to the clubs who participated in the campaign, who will now enjoy their well-earned rewards.”

Aoife Clarke, Head of Communications and Marketing at Lidl Ireland said: “We are delighted to award more than 360 local LGFA clubs with this well-deserved funding through this initiative. It’s been incredible to see local communities from across the country really get behind their clubs to raise some much-needed funds at grassroots level, and in turn really dialling up support and awareness of the importance of women and girls getting into and staying involved in sport.”

The announcement comes as the Lidl National Football Leagues is set to kick off on 23rd May.

Image credit LIDL / LGFA - Dublin and Skerries Harps footballer Lyndsey Davey is pictured with her clubs prize of €20,000 as Leinster Winner of the ‘Level the Playing Field’ competition.