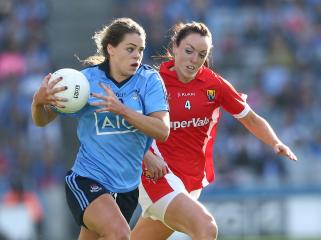 Healy at just seventeen years of age made her senior County debut for Dublin back in 2007 and now departs the Inter County stage having won every honour in Ladies football.

Noelle Healy, who is a member of St Brigid’s GAA club, is an Anaesthetist at St Vincents hospital in Dublin and has been one of many working on the frontline throughout the Covid-19 pandemic.

During her prestigious career, Healy has won five TG4 Senior All Irelands, 10 Leinster senior championships, one NFL Div 1 medal along with two NFL Div 2 titles, four All Star awards and was Dublin captain in 2016.

One of her finest performances for Dublin came in the 2017 All Ireland victory over Mayo which earned a tenacious Noelle Healy the TG4 Player of the Match accolade. She would finish the season with a third All Star Award as well as being voted by her peers as the Players Player of the Year.

Having played a huge role in Dublin winning their fourth All Ireland title in a row versus Cork on the 20th of December last, Healy was subsequently named at corner forward on the TG4 2020 Team of the Championship when the panel was revealed in February this year.

Noelle Healy has been one of the most inspirational, talented footballers to have donned the sky blue jersey and an amazing ambassador for Ladies Gaelic football not only in Dublin but at national level.

Reflecting on her career Noelle Healy said - “Its been beyond a dream to have represented Dublin at all age groups for the last 17 years, in both successes and failures.

Thank you to all the management teams I’ve had the honour of learning from and the teammates I’ve had the pleasure of playing with. I’m lucky that many of them I’m able to call great friends too.

My very best wishes to the squad in coming seasons, no doubt they will continue to go from strength to strength!”

Everyone in Dublin LGFA would like to wish Noelle all the very best in her retirement. We will look back on her time in sky blue with the fondest of memories.