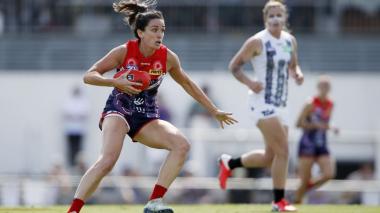 Niamh McEvoy has announced her retirement from the AFL Women’s competition.

She shared the news earlier this week with her team mates, having made the decision at the end of Melbourne’s 2021 season.

McEvoy hangs up the boots after two seasons in the red and blue of Melbourne.

The Dublin star was recruited alongside Sinead Goldrick in October 2019, joining the Dees for the 2020 season where she played five games.

McEvoy, who won a fourth successive All-Ireland title with Dublin last December before heading back to Melbourne in early January added another three senior games to her name in 2021, while also featuring for the Casey Demons in the VFLW.

There was high praise for Niamh from her  Melbourne boss ahead of her departure.

“Niamh has been a terrific contributor to our AFLW program over the past two seasons,” McPherson said.

“Whilst she didn’t play as many AFLW games as she would have liked this season, her contribution to the program was significant.”

McEvoy leaves Melbourne as one of only four Irish players to pull on the red and blue guernsey.

And while she won’t be making the trip back this time around, the 30-year-old will forever be part of the Melbourne family.

“The competitiveness, professionalism, and experience Niamh brought across from her highly successful Gaelic Football career back in Ireland has benefitted our group enormously over the last two seasons,” McPherson said.

“Niamh has been a highly valued and much-loved member of our team in the last couple of years. We thank her for her contribution and wish her all the best for the future.”