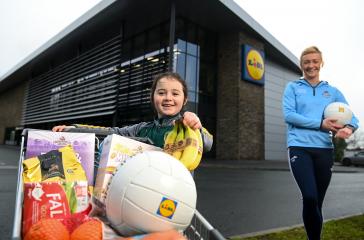 Get your Stamp Cards in - ASAP!

It’s the final week of ‘LIDL ‘Level the Playing Field’ club initiative, with organisers asking clubs to ensure they have all of their full stamp cards returned by April 11th.

Lidl customers are collecting stamp cards for their nominated club when they use the LIDL Plus App in store every time they shop. €30 earns a stamp, €60 earns two stamps and so on.

The campaign comes to an end THIS Sunday April 11th with sets of jerseys and cash prizes up for grabs.

Dublin LGFA took a peek at the Dublin clubs progress on the LIDL website this afternoon.

At 4pm on April 6th we noted that 25 Dublin clubs (up 8 on last week) have collected 100 stamp cards or more which is fantastic- well done everyone!

Ballymun Kickhams have moved into the top ten of Dublin clubs knocking Clontarf down into 11th spot!

A number of clubs are also very close to securing a set of jerseys or two with between 50/100 stamp cards collected.

Still topping the Dublin club leaderboard and placing themselves in a great position to win the overall Leinster provincial prize of €20,000 are Skerries Harps who have collected a whopping 553 stamp cards!!!

Wishing all Dublin clubs the very best of luck as the campaign moves into its final stage.

Shoppers - keep up the serious support of your local club!