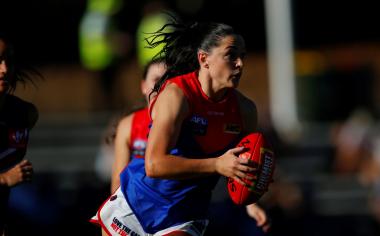 MELBOURNE’S Sinead Goldrick will miss the remainder of the AFL Women’s season, ruled out with a hamstring injury.

The Irish talent suffered the blow in the Demons’ impressive win over Fremantle on Sunday, with scans later confirming she had torn the hamstring tendon.

After consulting a surgeon on Wednesday, it was decided that Goldrick would require surgery, which she underwent later that afternoon.

She was joined by teammate Krstel Petrevski, who also went down the surgery route after re-injuring the hamstring she tore earlier this year.

“It was a devastating blow for Sinead, who has quickly become a much-loved, respected, and very important member of our team. Her elite speed and fierce competitiveness will be missed as we head into the finals next week, ” GM of AFLW Daniel McPherson told Melbourne Media.

“We are grateful that Sinead was able to get the corrective surgery done so swiftly. This gives her the opportunity to start a structured rehab program sooner than would otherwise have been the case, under the watchful eyes of our medical team, before heading back to Ireland later in the year.

“She will have the added benefit of a ‘rehab buddy’ in the coming weeks, with Krstel also undergoing the same procedure yesterday.”

Goldrick, who plays Gaelic for Dublin Ladies back home, has been a solid contributor for the Dees this season.

She has featured six times, only missing two matches with unrelated injuries, and has made her presence known on each occasion.

It will be the second year running that Goldrick misses out on an AFLW finals appearance after the pandemic forced her home early last season.

Both surgeries went well with the duo now set to begin their rehab process.