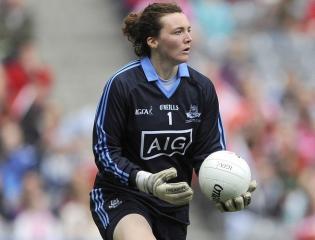 Former Dublin captain and All Ireland winner, Cliodhna O’Connor has been brought into the Dublin management team for the 2021 season by Mick Bohan.

O’Connor, a two times All Star award winning goalkeeper has gained valuable coaching experience since retiring as a player having worked with the LGFA in Croke Park on a number of coaching initiatives as well as playing a pivotal role on the Cuala hurling back room team that won historical back to back club All Ireland titles in 2017 and in 2018.

The Portmarnock native rejoined Mattie Kenny management team when he moved from Cuala in 2019 to take charge of the Dublin senior hurlers.

Cliodhna O’Connor captained Dublin during the 2011 season, including when they won the NFL Division 2 title after defeating Meath in the final.

O’Connor revolutionised how female Inter County keepers prepared and trained she is credited by many within the LGFA for modernising this key position and inspiring young girls to play in goal.

Apart from having a wealth of experience and knowledge of the women’s game O’Connor also has a Masters in Strength and Conditioning from St Mary’s University in Twickenham.

There is no doubt that Dublin’s former number one will be a huge asset to the Dublin set up when they do eventually return to action later this year and go in search of a fifth All Ireland crown in five years.