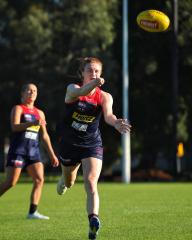 Melbourne will have another debutant in Round 4, with Lauren Magee selected in the side to face Western Bulldogs on Sunday afternoon.

Magee who signed with the Dees in August, earns her spot after only a few weeks of training with the group, having arrived in Melbourne last month.

Magee is an explosive player who is set to bring plenty of pace to Whitten Oval, while her competitiveness will no doubt be of big benefit to the Demons’ line-up.

Magee will be the third player from the county, and the fourth Irish woman, to represent Melbourne in AFLW.

While the Dees will welcome one Dub this week, another will unfortunately be sat on the sidelines.

Sinead Goldrick suffered a head knock late in last week’s clash against North Melbourne, and under the AFL’s concussion rules, is automatically ruled out.

The game will be streamed via the womens.afl APP throw in gets under way at 4.10am Irish time.