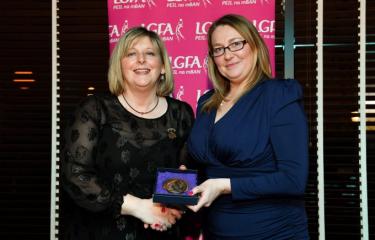 History was made on January 24th last, as the 2021 Leinster LGFA Convention took place remotely on Microsoft Teams. Owing to the current Covid-19 Pandemic and current restrictions, the annual meeting was forced online.

Having served his three-year term, Dominic Leech stood down from the President’s position with President-Elect, Trina Murray ascending to the position.

In his final address, Dominic Leech thanked his fellow officers, county board officials, committee members, match officials, supporters, and players for their support over the last three years. Dominic reflected on a busy three years – praising the Association for the support it gave him when his father passed away in 2018 and through difficult challenges in the last two years. He praised clubs and counties for their courteous manner, even when disagreements occurred and thanked them for their assistance. Margaret Brennan and Stephen Maxwell were also sincerely thanked for their work this past year. Dominic also thanked Miriam O’Connell and Suzi Doyle who worked so diligently with us last year. A moment’s silence was held for those who had lost loved ones in the previous year with sympathies extended to Pat Chapman on his recent loss.

Today sees long-serving members, Cathal Friel and Kathleen Mullins, stepping down from their respective positions on the Leinster Executive. Those at the meeting were full of praise for Cathal and Kathleen’s dedication and unwavering support to the Association. Leading the many tributes, Dominic praised Cathal and Kathleen – to Cathal in particular for his fixture knowledge and to Kathleen for her work in finance and on gates.

Provincial Officer reports were presented and adopted and the decision to publish the Administrator and Development Reports were adopted. (Please see below). Leinster Registrar Pat Carr reported on registrations noting only a slight reduction on the previous year. Leinster Treasurer Jox Fox reported on the finances. The meeting adopted both reports.

Leinster PRO Aisling Clery recapped a strange year for PR and reminded members to be kind online, while also recapping on the wonderful actions of clubs and counties in the province in the absence of the normal hectic footballing schedule.

Margaret Brennan, Leinster Administrator presented a comprehensive report on behalf of herself and Leinster Secretary Arthur Corrigan, recapping on a very different season last year, including the popular decision to stream games in the absence of supporters. 12 of the 16 Leinster Club Championship matches had been streamed in the competition in 2020 and it was something that would be considered going forward.

Stephen Maxwell presented the GDO and Development Officer’s Report and gave a thorough presentation on the various courses that have now largely been delivered through webinars. Some of the courses which did not go ahead in 2020 have now been converted to online events and will be staged throughout 2021 and will hopefully have some face-to-face action too, pending our current circumstances. Development Officer, Geraldine Giles stated that courses and knowledge was now available to all and urged people to get involved in the many webinars and courses that are being run now and for the next number of weeks and months.

After the election of officers, newly elected President, Trina Murray addressed the meeting and was delighted to accept the Presidency. Trina spoke about her involvement in the LGFA for the last three decades at all levels within the Association, firstly as a player and more recently at provincial and national levels. Congratulated by her husband Jack and daughter Emma, Trina will take up the reins as Leinster President, the first from Westmeath. Trina spoke about how she was looking forward to getting started and back on the playing fields when it was safe to do so.

We were delighted to be joined by LGFA President Marie Hickey and Marie congratulated all those in attendance at the Convention. She thanked Cathal and Kathleen for their many years of service at not only provincial level but national level too. Marie also thanked Dominic and Trina for their work and received many words of thanks herself. Marie will step down from the National Presidency after six years in charge at Congress this March.

Leinster LGFA Election of Officers for 2021: