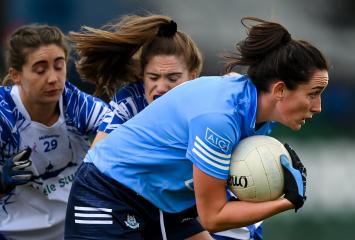 Dublin Team announced ahead of All Ireland Final

Dublin have named their starting 15 for this Sundays Christmas All Ireland Final showdown with Cork.  Mick Bohan has made just one change to his sides starting 15 that overcame Armagh in the semi -final with Niamh McEvoy replacing Sarah McCaffrey in the forward line.

McCaffrey who moves down to the Dublin bench scored two vital goals when introduced as a second half substitute in the 2017 All-Ireland final victory over Mayo and could make a similar impact if called upon to do so on Sunday.

Niamh McEvoy completes an all-St Sylvester’s full forward line as the Melbourne bound star is flanked on either side of the small square by her Malahide club mates Sinead Aherne and Nicole Owens.

The fitness of Sinead Aherne was a major worry for Dublin management. The Dublin captain pulled up early in the Armagh game with what appeared to be a hamstring injury. However, in several pre-final media interviews, the Malahide star had said that she was confident of making the final and was looking forward to returning to the full training earlier this week.

Dublin fans will be delighted to see Aherne named to start not only does the four times All-Ireland winning Captain bring an abundance of skill, determination, leadership and experience to the team, Aherne is also Dublin’s top scorer to date in the championship.

Twelve of the Dublin starting 15 named for Sunday’s showdown with old foes Cork also began last Septembers All Ireland clash with Galway. Missing from the starting line-up are Eabha Rutledge (head injury), Olwen Carey (work commitments) and Hannah O’Neill. O’Neill is named amongst the Dublin replacements for Sunday having battled hard to gain full fitness following an injury picked up earlier in the season.

The action gets underway on Sunday at 3:30pm watch the game LIVE only on TG4. Fans overseas can view the game via www.tg4.ie with radio coverage also available on RTÉ Sunday Sport.