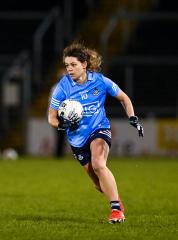 As featured in the Dublin Gazette

Fighting on the frontlines both at work and in sport, Noelle Healy admits there was a degree of “trepidation” when it came to throwing herself fully back into All-Ireland senior championship push.

A trailblazer in Dublin’s breakthrough era, the St Brigid’s star has been an ever-present over the last decade from the maiden 2010 glory to the latest series of seven All-Ireland finals in succession, including the current run of three titles.

But, as a doctor with first-hand experience and regular exposure to intensive care units since the pandemic hit, she had to think long and hard about whether to commit to this winter’s shotgun championship.

Initially working in Temple Street in the spring, she was redeployed to St James’s Hospital where staff shortages became more acute in ICU. Given that exposure and her wariness of limiting contacts, it meant a lot of mulling over whether it was right for her to return to the panel.

“It was definitely something I was conscious of before I came back to the group, particularly because of the exposure working in theatre and ICU,” she said of the situation.

“It certainly wasn’t a decision I took lightly; I spoke to my family and Mick [Bohan] to make sure nobody in the group would be unhappy having a healthcare worker there, especially when everyone has vulnerable people at home, people who they worry about.

“We were all very open about that. But you just have to trust that I’m looking after myself in work and we’re looking after each other when we come together.

“I trusted that the right precautions would be taken, and that we would take them ourselves. So, yeah, there was trepidation coming in at the start, but once I got used to it, you just get on with it.”

Decision-made, it offered her a chance to reconnect with a missing piece of her weekly routine, her outlet, her friendships, her escapism.

“I don’t think any of us take for granted being in this position, being able to come together as a group of friends, first and foremost, and being able to train together.

“I was looking back through WhatsApp messages from our group in May; it was when there was still a question about whether we’d be able to get back. We just said whatever happens, happens, but we acknowledged how special a group we all had and how, first and foremost, we missed each other.

“It hit home how much of an outlet it is, what a welcome distraction it is. When you’ve had a long day or night in work, often the last thing you want to do is get out of your bed and go training, but it’s been such a nice distraction.

“I don’t think I’m different because of the line of work I’m in; I think everyone has had a really tough year, people have had to adapt to working from home, working in isolation, getting used to new technologies, everybody has had an awful lot of challenges.

“We really appreciated each other this year more than any other year. We’ve often talked about the support structure we offer each other, but this year it really hit home for us how important it is.”

She credits Bohan with being central to that environment. The 2010 success did not reap instant dividends and three final defeats to Cork between 2014 and 2016 took their toll before the manager – returning for his second stint – created a fresh culture.

“We probably did wonder if we were good enough, we had thrown everything at it, certainly emotionally, but we just weren’t getting anywhere. But Mick brought it back to why we started playing football in the first place, he brought it back to the skills, to the friendship that we had.

And that joy has been evident of late. Once the county game returned in late October, Healy took to it with gusto, netting just 11 minutes into the win over Donegal.

She weighed in with a trio of vital points against Armagh in the semi-final, too, putting her in line to face a Cork foe she knows well, particularly from her season winning a club All-Ireland with Mourneabbey while on placement in Rebel country.

“Unfortunately, my plan to pick up some inside information didn’t work,” she jokes when asked about any trade secrets she was able to pick up from her time in enemy territory.

“By the time I left Cork, I was talking to Cork relations with a little bit of a twang. But I’ve immersed myself back in Dublin and I’ve lost my th’s!”

“We all know Cork quite well, and they know us. This is our fifth All Ireland in the space of seven years and we played them in two quarter-finals before that as well.

“We would have played against each other a lot at underage and in college too, so we all know each other very, very well.”

The other big tweak to this year’s championship is the absence of loved ones in the stands and, win or lose, the Castleknock woman knows the final whistle after Sunday’s final will be surreal.

With over 50,000 in attendance for the past few years, seeking out some special faces in Croke Park is usually the first port of call. Healy, though, has experienced already how much it means to her family to be there with her.

“My Mam was ringing me before every match this year, to wish me luck and see how I was getting on. I could definitely sense when I was talking to her before the semi-final that there was a genuine sadness there that she wasn’t able to go to the match.

“I think they are finding it very tough watching it at home. Look, there are people in much worse situations who have had to deal with a lot more hardship than we had not having our parents at matches, but it’s hard on them to be that distanced from us.

“After a successful game, they’re the first people you go to for a big hug – and I suppose to get some constructive criticism!”