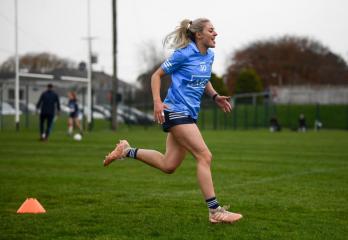 Dublin await their Semi Final opponent’s...
Reigning All Ireland champions Dublin with two championship wins now under their belts and their place safely booked in the TG4 All Ireland semi final will be keeping a close eye on one particular championship fixture taking place this coming weekend.

Dublin’s next championship appearance which will be the 2020 All Ireland semi final, will take place on November 28th against group 4 winners, Armagh or Mayo.

Armagh and Mayo meet in the 3rd round of group 4 this coming Saturday (Nov 14th) at 3:15pm in Parnell Park. The game will be broadcast LIVE on TG4.

The three week gap between fixtures will give Dublin an opportunity to tweak issues that cropped up in their round robin performances.

Goldrick and McGrath did not make the match day squad for the outing versus Waterford having both picked up knocks in the opening game with Donegal.

Rutledge has not featured for Dublin since Inter County teams returned to training in September having previously played a pivotal role for Kilmacud Crokes in the Dublin club senior championship.

There was however really good news on the injury front for the Dubs with Nicole Owens togging out for Blues last Saturday for the first time in over 12 months having been away from football owing to a serious knee injury.

All in Dublin LGFA  where delighted to see Nicole back out in the sky blue jersey.
This site uses cookies: Find out more.
Scroll to top