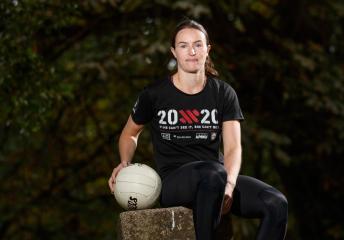 20x20 Campaign the Next chapter

Sinéad Aherne is calling on people across the country to choose what comes next for women in sport, encouraging everyone involved in sport to ask questions of ourselves and of society, to shape how the future plays out.

Sinéad Aherne has spent nearly two decades with the Dubs.

Thrilling triumphs and harrowing defeats have been part of Aherne's own adventure.

Few are better placed to assess the development of women's sport and the distance travelled in many ways. For all the advancements, though, Aherne is adamant that further improvements can be made.

During the past number of years how important is the increased media exposure?

“I'd put a huge emphasis on it," Aherne replies.It has started off in a manner that we still need to improve hugely."

That is why Aherne believes that the coming weeks, months, and years carry so much relevance. "Do we have adequate commentary at games?," Aherne continues.

"Do we have articles, the critical analysis that are appearing around games? So that people see a game on TV and are actually tuning into it, do they have a reference point to say this is what has been going on over the course of the season, this is informed.

"Key battles you might want to watch out for. These are the tactics the media think you should be looking out for. Unless you have that it is very hard to build a following, a relevant following over a longer stream of time. There just isn't enough of a hook for people to get invested in the sport, to stick with it."

Ultimately every facet of the media needs to continue to provide support and i depth coverage according to Aherne.

"I think the critical analysis in the media, how we show imagery and stuff in the media, the language we use, are all still key questions we need to do more around," Aherne adds before referencing the latest 20x20 video offering.

"Visibility, we saw that in the video, the younger girls asked in 2018 and 2020 and are able to point at seeing a picture on the front page of the paper, it re-emphasises all of those social constructs that people grow up with.

"That is it, building from the next generation up as to what is normal to expect to see for women's sport. That is where the next chapter is important, not just to sort of say 'that is it, job done'.

"It is to really not accept what is the basic minimum for women's sport, not to have brands getting involved just to get involved, but to think what can we bring to this campaign, and what can we push forward.

"Across all of the different aspects I think media is a crucial one in doing that."

The campaigns and enhanced coverage across all media platforms count, but how critical are role models?

"I think it is key for the perceptions that people have on the sport when they're trying to follow it, or get into it," Aherne replies.Unless you have them, unless it's become normalised to, you know, 'I'm going to go down and I'm going to play soccer because the Irish women's soccer team were on TV last night and I want to be like Katie McCabe', or Denise O'Sullivan is flying it in the US, playing on top teams.

"Unless they have those role models to aspire to and to be running around in the garden, are they really going to be as invested in the sport as they could be?

"To have it normalised, 'right I'm going to go into school and I'm going to kick around in the yard' as opposed to 'I'm going to hang back because that's not normal for me to do that'.

"So I think it is important. But as I said there, a lot of the pieces in the coverage in the media have been putting role models out there.