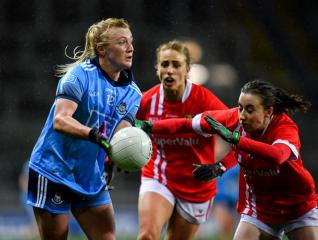 Cork strengthened their grip at the top of the LIDL National Football League Division One table when they held off a late rally from All-Ireland champions Dublin at a rain-swept Croke Park.

The ever-dependable Orla Finn kicked five points for the visitors, while Hannah Looney also chipped with 0-2 during an industrious display in very difficult conditions.

Carla Rowe led the way with 1-2 for Dublin but despite enjoying a late flourish, they fell to their first loss of the campaign.

While they didn’t always capitalise on the opportunities that fell their way, a brace from the reliable Finn extended the lead for Ephie Fitzgerald’s charges. Rowe kicked the hosts into gear with a two-point salvo, but Cork subsequently reinforced their authority.

Finn registered 0-13 when the Munster side overcame Dublin in last year’s league semi-final and she split the posts at the end of an intricate attacking move before adding a routine free on 24 minutes to make it 0-5 to 0-2 for Cork at the break.

Maire O’Callaghan and Looney were combining to good effect in midfield, and it was the latter who took the charge when the action resumed.

The Aghada star landed points from play with side of another Finn free to give Cork a firm control of the proceedings.

Dublin, despite struggling to impose their attacking game against a watertight Cork defence, received a lifeline midway in the third quarter when Rowe slotted home a penalty into the bottom right corner of the net after a foul on Oonagh Whyte.

Five-time All Star Lyndsey Davey was simultaneously introduced off the bench for her seasonal return as Mick Bohan’s side, who secured their sole league title in 2018, looked set for a big finish to the contest.

And they certainly ramped up the pressure on the league champions in a frenetic finish with Hannah O’Neill and Davey shooting points.

But they were unable to draw level with a free from Rowe in the dying moments drifting wide as Cork held on for victory.