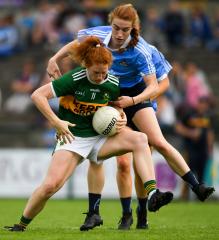 For a second year in a row Dublin and Kerry meet in the All -Ireland quarter final at stake is a semi-final meeting with either Cork or Tyrone on August 25th in Croke Park. This is the first time in the history of the LGFA that both senior All-Ireland semi-finals will be staged at GAA headquarters.

Dublin’s starting 15 for Monday’s clash between these two rivals will see 12 players line out for Dublin that fielded against Kerry last year in Dr Hyde Park.

Missing from the squad are Leah Caffrey and Deirdre Murphy both of whom are currently travelling overseas while the injured Nicole Owens is not listed. Owens picked up an injury in the pre-match warm up last Saturday in Parnell Park and is ruled out for Monday’s clash in Tullamore.

Mick Bohan and his management team have made two changes to their starting 15 that overcame Monaghan last weekend.  Top Dublin scorer in the championship Niamh McEvoy returns at centre forward having overcome a foot injury that kept her out of the Monaghan game while Jennifer Dunne is named to start at corner forward. Making way for McEvoy and Dunne are Oonagh Whyte and Niamh Hetherton.

Dublin LGFA will have LIVE score updates available on our Twitter page for those patrons unable to attend the match in O’Connor Park while the game will also be televised LIVE on TG4.

Reminder to those heading to the game

Cork and Monaghan will contest the Minor All Ireland final in a curtain raiser to the senior quarter final. The action in the minor game will get underway at 3pm.