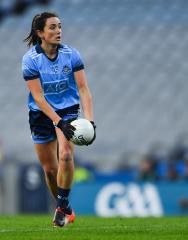 A foot injury prevented Niamh McEvoy from lining out last weekend in Dublin’s victory over Monaghan. Despite that set back the St Sylvesters ace remains top of the Dublin scoring leader board with an impressive tally of 3-08 of which 3-02 came from play.

However, hot on her tail is Sinead Aherne who scored an impressive 1-11 which included a first half penalty and 7 frees in last weekend’s win over the Farney County. Aherne picked up a shoulder injury very early on in the Leinster final versus Westmeath which resulted in her having to leave the field of play. As a result of the injury she did not feature for Dublin in their opening All Ireland series game versus Waterford. But Aherne was back with a bang last Saturday much to the delight of the Dublin supporters in Parnell Park.

Nicole Owens remains in third sport with 2-05 making it a top three for the St Sylvesters club on the scoring leader board. Similar to McEvoy, Owens did not feature in the Monaghan game having picked up an injury very late on in the pre-match warm up and was replaced by Carla Rowe who was making her return to action having missed both championship games to date owing to injury.

In total, 15 players have been on target for the Dubs this summer notching up an impressive 12-46 (82) in their three championship outings to date while conceding 3-17 (26). Dublin’s scoring average per match has been 27 points while yielding just 8.6 pts to their opponents.

NEXT UP - Dublin will take on Kerry in the quarter final of the TG4 All Ireland championship on Monday August 5th at 4:45pm in Bord na Mona O’Connor Park (Tullamore).

The Dublin v Kerry game will be preceded by the Minor All Ireland final between Cork and Monaghan at 3pm BOTH games are live on TG4.