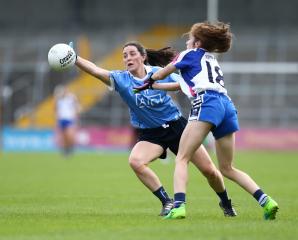 Dublin and Waterford last meet two years ago in the 2017 All Ireland quarter final in Nowlan Park. On that occasion Mick Bohan’s side ran out comfortable winners notching up a 2-15 (21) to 1-7 (10) victory over their Munster opponents.

Club mates, Sinead Aherne and Nicole Owens were on target for the Dublin goals while Roisin Tobin netted for Waterford. Waterford finished the game with 14 players following the dismissal of Gráinne Kennelly with the red card being issued in the 46th minute of the game.

However, this latest encounter between the two sides is expected to be a much closer contest.

Waterford’s season to date has gone well, winning division 2 of the LIDL NFL thus securing top flight league action in 2020. While back in June, Ciaran Curran side gave Cork a really stern test in the TG4 Munster final.

Waterford have been building steadily over the last number of years with huge work going on at underage level in the Déise County. They have grouped together a talented squad which contains a nice blend of youth combined with experience. Their aforementioned Munster final tussle with provincial rivals Cork will give their younger players huge confidence going into the 2019 All- Ireland series with Dublin and Monaghan.

Two weeks ago in the Leinster final, Dublin had to dig deep to see of the challenge from a dogged Westmeath side and in doing so won their 15th Provincial title. That victory came at a cost as team Captain Sinead Aherne picked up a shoulder injury which most likely will rule her out from playing any part in this Saturdays contest.

“It’s not too bad, I just shipped a bit of a knock against Westmeath. I’ll be a couple of weeks getting back but I’m happy enough with how it’s progressing and I’m looking forward to returning. “I don’t expect to be in the frame this weekend but we have a couple of weeks to the next game and I’ll be targeting that one against Monaghan” – Aherne said at a LGFA media event earlier in this week.

In total Bohan and his management team have made three changes to the Dubs starting 15 for Saturday’s encounter in Portlaoise.  Éabha Rutledge from Kilmacud Crokes gets the nod at corner-back ahead of Martha Byrne. 2018 All Star, Lyndsey Davey returns to the first 15 at corner forward replacing the injured, Aherne. While Jennifer Dunne is named ahead of Oonagh Whyte on the Dublin half forward line.

The action gets underway in O’Moore Park at 3.30pm with the game LIVE on TG4