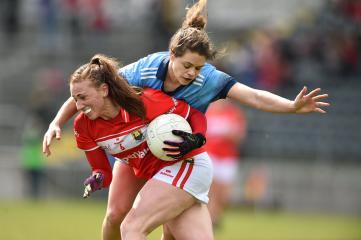 Bohan has made eight changes in personnel to the team that lost out to the Rebelettes in the final round of group fixtures.

All Star goalkeeper Ciara Trant replaces Rachel Fleming while there are also starts for Martha Byrne, Rachel Ruddy and Niamh Collins in defence.

Lauren Magee comes in at midfield while Lyndsey Davey, Footballer of the Year and captain Sinéad Aherne and Nicole Owens are listed in attack.

Cork, meanwhile, have also made a switch between the sticks, with Martina O’Brien replacing Lisa Crowley.

There’s a further change in the team and it’s in attack, where Orla Finn slots in ahead of Rhona Ní Bhuachalla.

There’s lots of talent and firepower on the Cork bench, with captain Doireann O’Sullivan and Eimear Scally to call upon.

There’s also a welcome return to the Cork set-up for Saoirse Noonan, who lit up the 2018 championship in her debut season.

Former underage start Noonan, from the Éire Óg club, has recently recovered from a serious knee injury and is listed at number 26 for Cork.

In total, there are 13 survivors from the 2018 TG4 All-Ireland Final meeting between the sides in the Dublin team.

Leah Caffrey and Siobhan McGrath are the two players who will not start on this occasion, but who were in from the start in front of 50,141 spectators at Croke Park last September.

Their direct replacements on this occasion are two-time All Star Rachel Ruddy, who was unavailable in 2018, and Aoife Kane.

The Ladies Gaelic Football Association has confirmed that both of the weekend’s Division 1 semi-finals will be LIVE on their Facebook Page: https://www.facebook.com/LadiesGaelicFootball/

Cork and Dublin will know who their potential final opponents are before they get their match underway, as Donegal and Galway lock horns at Glennon Brothers Pearse Park in Longford on Saturday (2.15pm).