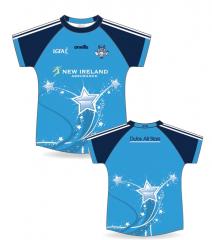 Dublin LGFA in association with New Ireland Assurance is delighted to announce the line- up of our 2018 Junior Dub Star teams.  Dublin LGFA first introduced the Junior Dub Star concept back in 2015 since then the Junior event has proven to be tremendous success providing a perfect platform to showcase, recognise and acknowledge the commitment and dedication of our Junior club players who give huge commitment and dedication to their sport.

The two panels this season have increased slightly in numbers thus providing 55 players representing 46 junior clubs from right across the County the opportunity to wear a newly designed Dub Stars jersey. Players named on both Junior Dub Stars teams have all been nominated by their respective clubs.

Each player chosen as a Junior Dub Star will each receive a full Dub Stars kit along with a specially commissioned Dub Stars commemorative medal.

Fiona Hogan (O’Dwyers) and Aoife Caffrey (Na Fianna) will captain the sides in recognition of their respective clubs winning the Junior B and Junior C New Ireland Assurance club championships in 2018.

The Junior Dub Stars game will get proceedings underway in DCU (St Clare’s) at 11:30 am followed by the senior game at 1.30pm, Senior Dub Stars versus All Ireland champions, Dublin.

Admission to the Dub Stars event on January 13th in DCU will be free of charge however patrons will be encouraged to support a bucket collection in aid of a charity as chosen by Dublin LGFA.