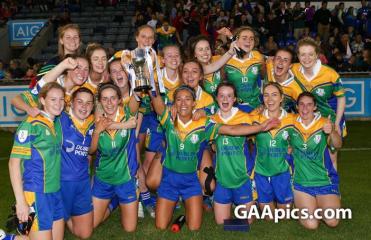 A last gasp goal for Clanna Gael Fontenoy won the intermediate title for the Ringsend club, as substitute Sinead Taylor netted with almost the last kick of the game to snatch the title.

Clontarf, whoâd led throughout, made much of the running in the intermediate final, with young second half substitute Caoimhe OâConnor lighting up Parnell Park with her winding runs, but Fontenoy ultimately possessed the greater fire power, and edged out their cross-river rivals.

It was touch and go early doors, with Clontarfâs main threat coming from the running of Sarah McCaffrey, sister of menâs star Jack. Sarah Murphy pushed Clontarf in front within seconds of the start, with Fontenoy responding through a weaving run from Marie Twomey that saw her hammer the ball into the side netting.

Aisling Ryan snatched the first big moment, grabbing a long ball that bounced over the heads of the Clontarf defence and finishing firmly past Fidelma Cosgrave, only seconds after Twomey has bounced a looping shot off the top of the Clontarf crossbar for a point that came dangerously close to creeping in.

Both sides, though, were threatening. McCaffrey - intent on frightening the life out of the defence with her charging runs at every opportunity - scrambled into the Fontenoy area, only to see her shot blocked by Claire Byrne between the posts. At the other end, Rebecca McDonnell and Lisa Curtin in the Ringsend sideâs front line started to look increasingly threatening as they charged forward from midfield.

Much of rest of the second half was an exchange of firepower: while McCaffrey offered the creativity for Clontarf, their entire forward line looked dangerous, while Clanna Gael found a natural shooting hub in Aisling Ryan, who found herself on the end of much of their more threatening play.

It was McCaffrey, in the end, who found herself in the right place at the right time, taking a hand pass ten yards from goal at the end of a fluid, sweeping move from Clontarf. She slid the ball past Byrne to give the north siders a half-time lead of four, 1-8 to 1-4, in a fast paced and physical encounter.

With the game threatening to get away from them, Fontenoy took their time over the half time break, a move that initially seemed to pay off as a Rebecca McDonnell point attempt looked like dropping short, only to find its way over the head of Cosgrave and nestle in the Clontarf net.

A weaving run from pacey Clontarf forward replacement Caoimhe OâConnor threatened to underdo the good work, ending with a shot clattering off the underside of the Fontenoy bar.

OâConnor, a Dublin under-16 star, continued to threaten the Fontenoy defence as the teamâs exchanged points, twice going for goal, with the latter effort forcing a point blank save out of Claire Byrne between the Ringsend teamâs sticks.

Twin points from replacement Sinead Taylor bought Clanna Gael back within a point of their northside rivals, before Aisling Ryan finished off a Fontenoy break to draw them level at the start of injury time.

For all the buzz around OâConnor, it was the other key forward replacement, Fontenoyâs Sinead Taylor, who finally put things to bed. Her shot from the edge of the box snuck through the hands of Cosgrave to allow the Ringsend side - behind for almost the entire match - to snatch the title at the last.