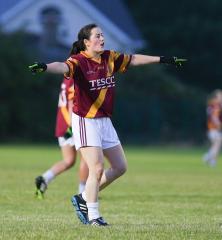 St Maurâs edged out Castleknock in the Junior A final on Wednesday night, with the Rush side conceding an eight point first half lead as they struggled through the latter stages, but clinging on for glory.

Castleknock restricted Maurâs to just three points from the 23rd minutes onwards, but in a low scoring end to the game, Olivia Leonard kept her cool to slot over with an injury time final kick and send the title to north county Dublin.

The first half, however, was frantic. Hannah Hanton set the tone, smashing a free from huge distance over the Maurâs bar with no more than two minutes on the clock. Leonard delivered a swift response for Maurâs, first scoring from a tight angle down the right, and then beating her marker to the ball to weave in on goal off the touchline and add a second.

Maurâs quickly established early dominance, their powerful running side racking up five points on the bounce, the last coming from an Aine Pyne run and shot that smashed off the crossbar and edged over the bar rather than into the net.

Alice McNally pulled one back, but it was becoming increasingly clear that the Rush side had pace in abundance, as first Pyne and then McGuinness found the space to blitz through the Castleknock defence and slot over.

With Maurâs already five points up, Naomi Clareâs free from distance dropped just over the head of a backpedaling Amy Mahony and into the Castleknock net, opening up a eight points lead for Maurâs and leaving Castleknock with a mountain to climb with 20 minutes on the clock.

Aoife Whelan almost immediately hit back, latching onto a long ball over the Maurâs defence to charge in on âkeeper Francesca Towers and slot in at her at her near post. Three minutes later Aisling OâDonnell almost had the game blown wide open as her speculative shot beat Towers and clattered off the bottom of the Maurâs post.

Castleknock came out hard after the break, too, with McNally pushing a chance on goal wide, and Maurâs packing the defence, but for the early stages of the second period the gap sat at about three points as the teams exchanged scores and the game went through a scrappy period.

Mid way through the second half it had been over a third of a match since Maurâs had scored, and despite being behind Castleknock were starting to look like favourites. OâDonnell came closest to turning the game, as she burst through and hit a firm strike straight at Maurâs âkeeper Towers.

Leonard steadied the ship just in time for Maurâs, breaking their scoring duck and reopening a two point difference between the teams, but Carolan halved that, and with Maurâs hitting a string of wides, Castleknock eventually took advantage to level up through substitute Debbie Geraghty as the clock ran down.

Maurâs turned it on when it counted, though, as the outstanding Leonard showed the composure needed to break from midfield and fire the match-winning point firmly over for Maurâs magic moment.